Fiona and I were at Target last weekend. Please note the context of the situation: the two of us flew down to Florida to see my mom (my mom was hospitalized with pneumonia but had to drive back a couple of days later. My 19-month old and I went down to help… then we realized that we were the saddest road trip group of all time: my mom had to stop every 4 hours to avoid blood clots since she still had pneumonia, I had to stop every 1.5-2 hours to avoid blood clots since I’m pregnant and the size of the house, and Fiona…. well, let’s just say bringing a 19-month old on a road trip isn’t the most fun thing in the world. Also, none of us were allowed to lift over 20 lbs. Winners.).

Below is a picture of Fiona passed out in the car… she did such a great job on the trip!

Below is a picture of Fiona with her new shades on in Florida… She had so much fun!

When we came back, we had one day without my husband and my 11 year old stepdaughter. Fiona did so well at Target, she said “Hi” to everyone there at least 15 times (or until they said, “Hi” back). I’ve noticed she gets very forceful with her “Hi’s” when it’s a frat-looking type guy… I think she already has a “type.”

When Fiona says, “Hi” her whole face lights up, she waves and she has a huge smile on her face. It’s impossible to be upset when a toddler says hi. Am I right?

Except for this one B (I didn’t really set that up so you could make an objective opinion, did I? Oh well, I forgive myself). We were in line at checkout (Fiona had done wonderfully…. even after just getting back from a 5-day road trip). She was saying, “Hi” to everyone and the woman behind us was probably mid-50’s and had a black eye. Fiona said, “Hi” to her and she said, “Hi” in an unhappy voice. Then Fiona said it again (okay maybe like 3 more times) and the woman said, “Ummm… can’t you say anything else?” with a super snotty tone. She continued, “Can’t you say puppy? Happy? Anything? How old are you, 1 1/2? You should be able to say more than, ‘Hi.’”

WOW was I annoyed. Fiona was being so sweet and here this woman is, reprimanding her on her vocabulary. I replied (maybe in a bit of an aggressive tone), “She can say about 50 words… she just chooses to say, “Hi” to everyone because she’s in such a good mood.” The cashier got uncomfortable… I could tell she agreed with me and she kept smiling and saying, “Hi” every time Fiona said it first. Everyone else in the store was eating out of the palm of her hand… except for the crazy woman with the black eye.

So the woman responds, “Well… I guess I’m just sick of hearing her say, “Hi.’” I went silent because otherwise I might say something else… something that I would either regret or be SUPER proud of later. On our way out, the black-eyed woman said, “Can you say bye? Puppy? SOMETHING other than, ‘Hi?’” Fiona looked at her, said, “Hi” and then said, “Bye” to everyone else while waving. That’s my girl- NEVER GIVE IN!

It reminded me of one of my super close friends on a trip to Macy’s. She was there with her 10-month old and 3-year old who was being pretty difficult. My poor friend had been by herself with the kids for a week while her husband was out of town. She was in the state that all moms know: sweaty, trying to wrangle both kids while somehow completing your mission. Her oldest let out a really high-pitched shriek while laughing and a woman nearby said, “Well, THAT hurt my ears.” My friend turned to her (she had been putting up with her toddler’s mood swings all day) and said, “You know, it’s people like you that make moms feel bad about themselves” and walked away.

When my friend first told me this story, I thought, WOW she must have been fed up with her kid to say that! Then about 2 minutes later, I thought…. wow… that stranger who said snapped at her was so rude. I hope I would have just said what my friend said (and not included anything that showcased my sailor’s mouth).

I’m not one of those people that brings my young kids to nice restaurants and expects everyone to be accepting when they throw tantrums. However, as a stay-at-home mom, I have errands to run and I expect to be able to bring my kids to the coffee shop, the mall, Target, etc. and not have other people say rude things to me (whether it be, “Can you say SOMETHING other than ‘Hi’? or “Well, that hurt my ears”) just because my toddler/child is acting like… well, a toddler/child. Kids throw fits… it doesn’t make me a bad mom. I think it’s better for me to let them sort it out than to give in and rush out of wherever I am without getting my errands done.

Now, when we were in St. Charles, MO on our road trip last week and Fiona had what I think the book of world records would even admit was the biggest blowout of all time… I get why we got some dirty looks. I’ll accept wrinkled noses when my toddler gets shit out of her diaper, up her back and even on the floor (REALLY? THE FLOOR? Yes, the floor.). Okay, I get it. But is it too much to ask for people to be civil when my kid’s saying, “Hi” or when my friend’s kid has had enough and let’s out a shriek? Thanks for the commentary but…. no thanks. How should we respond? My friend is right… it is people like her that make us feel bad about ourselves… but we shouldn’t be put in that awkward position of having to apologize when we’re the ones dealing with our kids, right? So what should we say?

Below is Fiona with the crazy eyes… okay I can maybe see why she’d freak someone out. 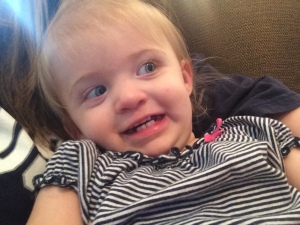